Jerry Parr (1930-2015) is best known as the 50-year-old Secret Service agent who saved President Reagan’s life in the March 30, 1981 assassination attempt. But his actions that day are just part of his remarkable life story.

Parr was born in Montgomery, Alabama at the start of The Great Depression and grew up in Miami, Florida. When he was 9 years old, his father took him to see the movie Code of the Secret Service starring Ronald Reagan as dashing agent Brass Bancroft. The film thrilled young Parr, and he hoped to become an agent himself someday. But life took a different turn.

Parr’s youth was scarred by poverty, alcoholism, divorce, violence and bullying. He grew up learning to be ever alert, prepared for danger that “could turn up anywhere, anytime.” These instincts served him well as a lineman for Florida Power and Light, where his quick reflexes and snap judgments helped him survive several near-death experiences. His colleagues were not as lucky, and Parr was a pallbearer at funerals for eight colleagues.

When a recruiter for the Secret Service came to town, Jerry Parr recalled the film he had seen as a boy and decided to apply. When asked if he was ready to assume the risks of the job, he replied that he didn’t think it would be more dangerous than what he had been doing for the power company. Parr joined the Secret Service in 1962, the oldest rookie in his class.

Throughout his 23-year career with the Secret Service, Jerry Parr provided security for several US presidents and vice-presidents, as well visiting kings, queens, emperors and Pope John Paul II. By 1979, he was promoted to head of White House security for the Presidential Protection Division. On March 30, 1981, Parr was the agent standing next to Ronald Reagan when John Hinckley opened fire outside the Washington Hilton Hotel. 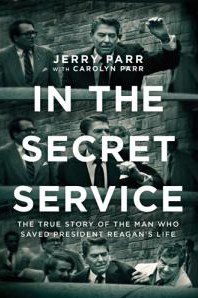 In Chapter 9 of his autobiography IN THE SECRET SERVICE,  Jerry Parr shares his riveting, first-person account of that fateful day minute by minute — from the mad rush to “cover and evacuate,” to the decision to divert the motorcade to George Washington University Hospital, to the stomach-churning realization that the president of the United States had been wounded on his watch. It was every Secret Service agent’s worst nightmare, and Parr couldn’t help but relive the memory of the Kennedy assassination — and the sickening fear of losing another president.

Readers of IN THE SECRET SERVICE will understand why Jerry Parr said the Reagan assassination attempt was both the worst — and the best — day of his life.

Buy IN THE SECRET SERVICE now